LBJC at the 2017 National Championships 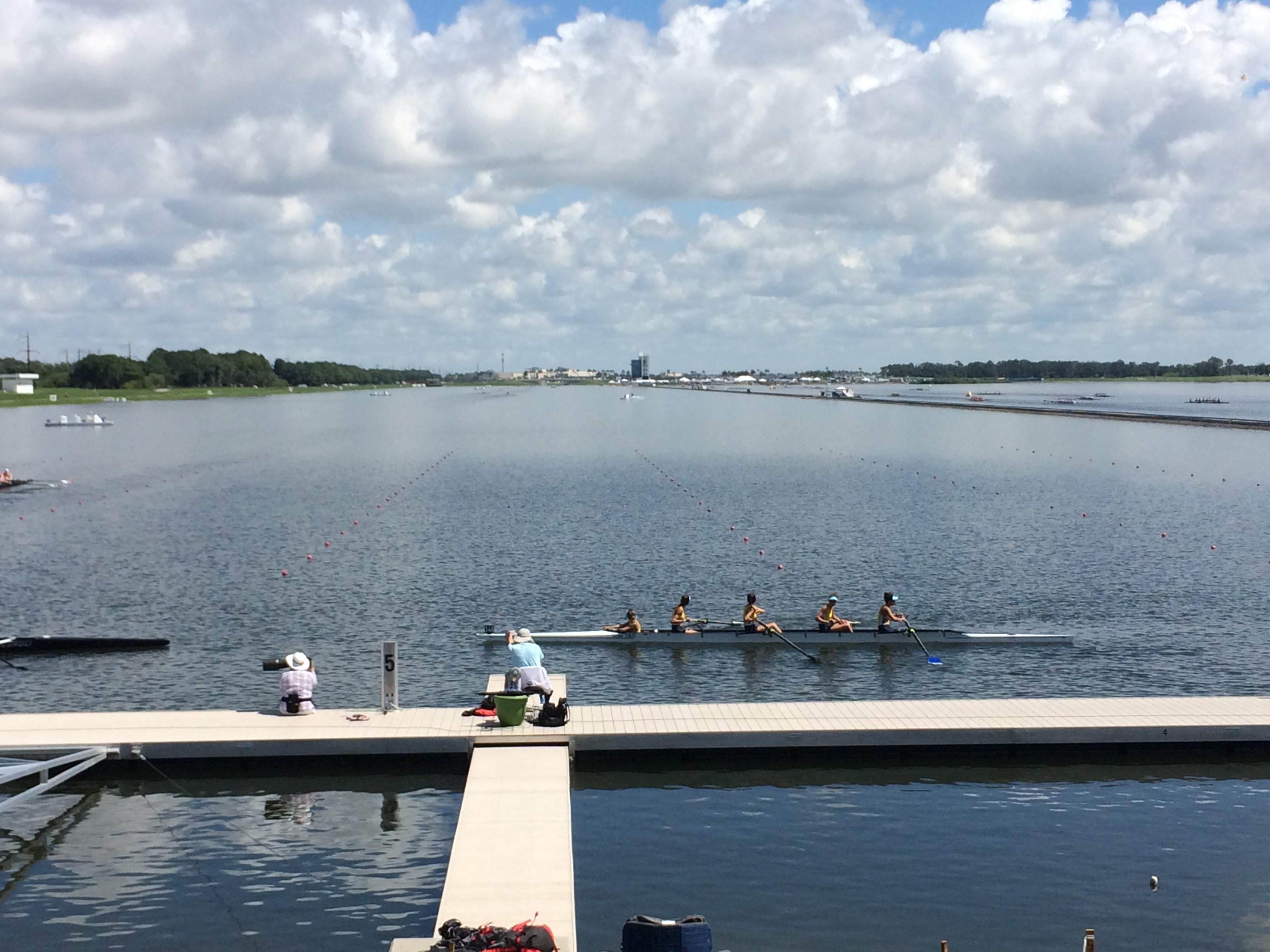 Long Beach Junior Crew had 22 athletes travel to Sarasota, Florida  on June 9 to compete in the U.S. Youth National Rowing championships. Each crew competing at the national championship regatta had qualified for the event by finishing in the top three places at one of six regional championships held all over the country.  We were entered in three events: the women’s lightweight double sculls (WL2X), the women’s quadruple sculls (W4X), the men’s lightweight four with coxswain (ML4+), and the women’s lightweight four with coxswain (WL4+).   The team was greeted with hot and humid weather with a heavy dose of afternoon thunderstorms, quintessential Florida weather. 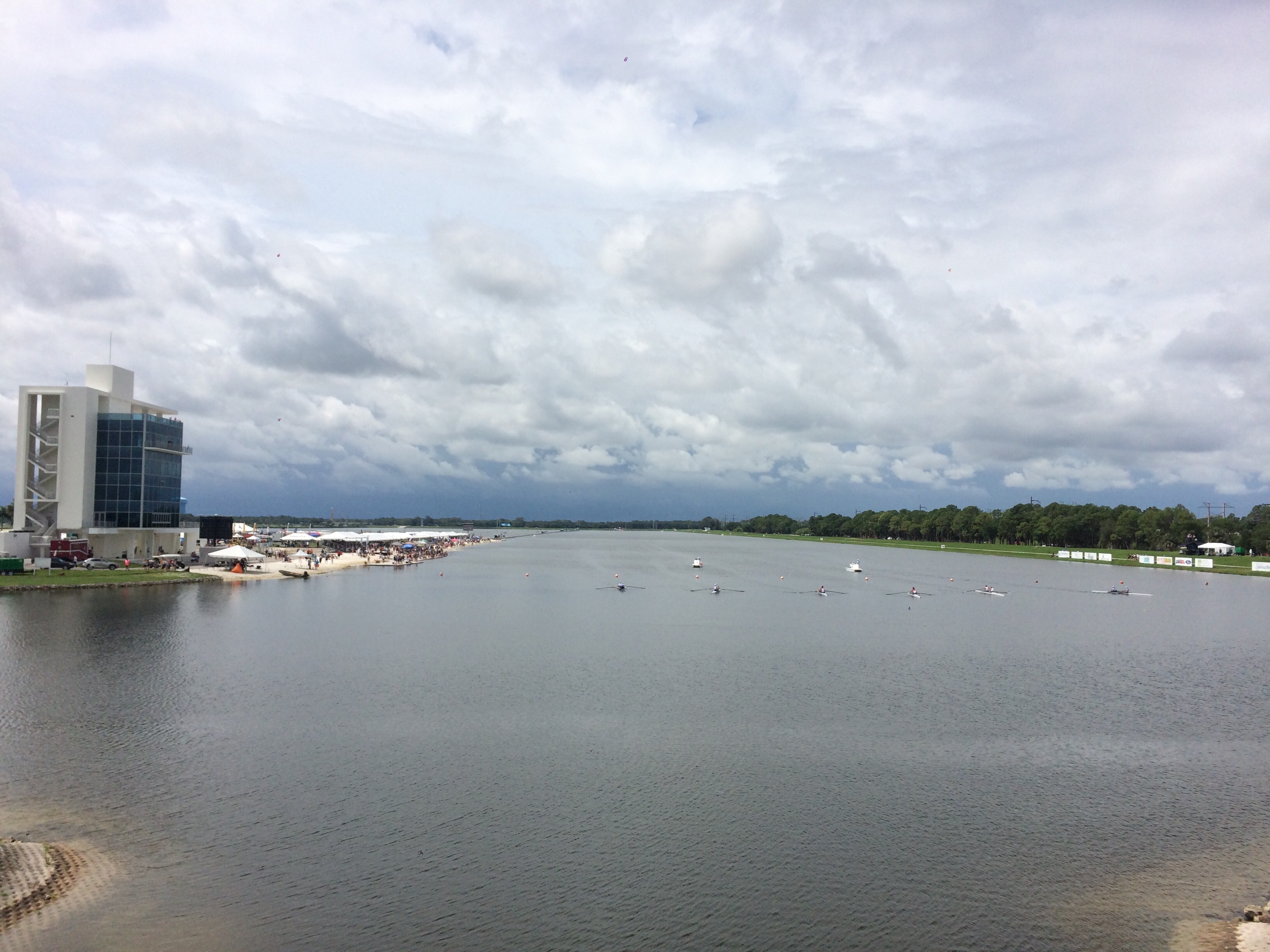 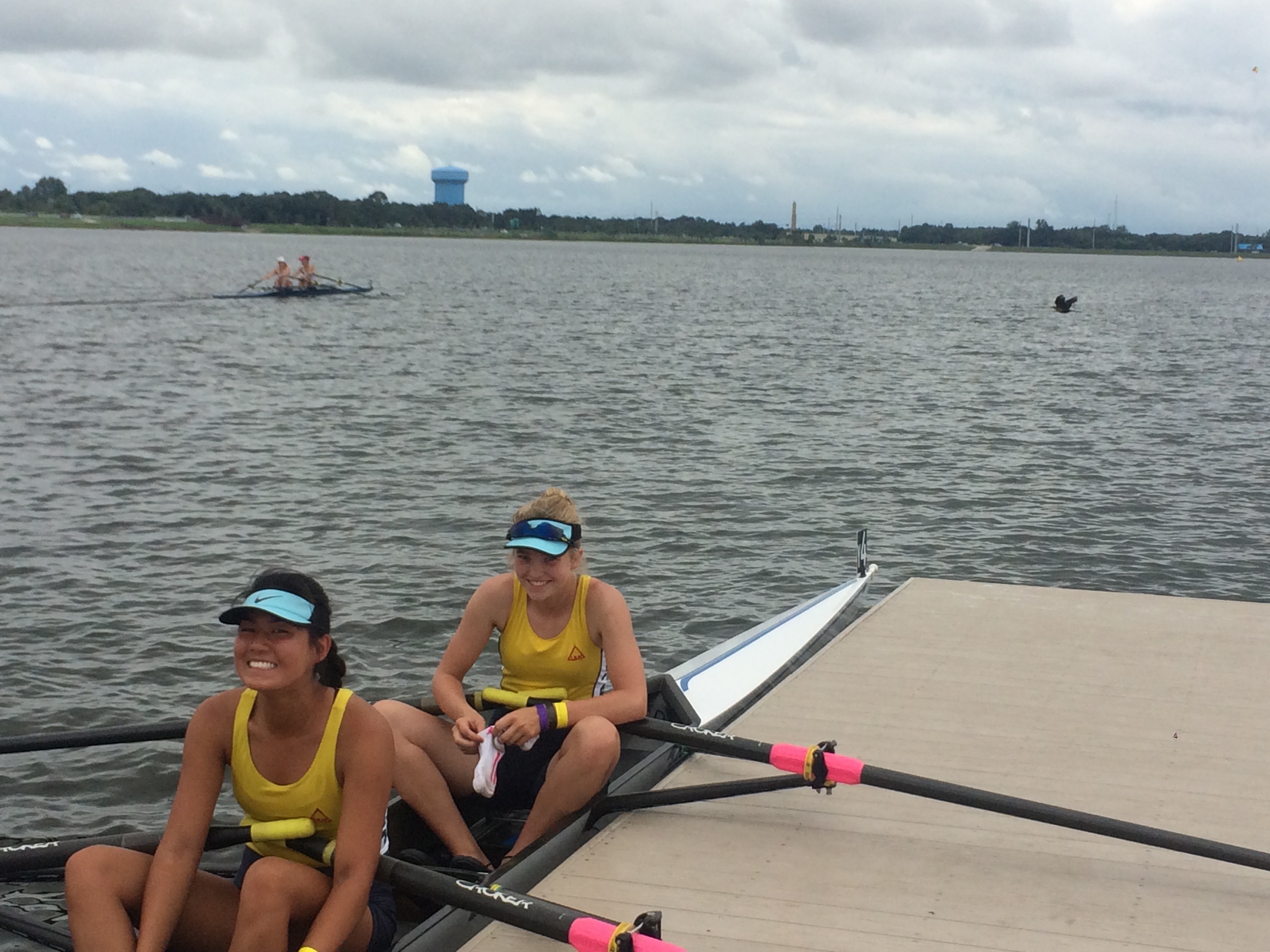 inal (places 19-24). All of the boats competing at this regatta have medaled at their respective regional championships. Needless to say, the competition is extremely good. There are no easy races. Every placement at this regatta is earned with real determination and high caliber racing. In the time trials, three out of our four boats finished in the top 12, but unfortunately our Lightweight Women’s double finished in 13th place.   Our LW2X, comprised of Amanda Yap and Danielle Hoekstra, missed qualifying for the Semi Final by a mere 0.2 seconds.   That margin is especially painful considering the girls snagged a buoy in the last 100m of the time trial, slowing them down by well more than 0.2 seconds.

On Friday afternoon, LBJC had the semi-finals for the Men’s and Women’s Lightweight Fours.   The Varsity Men kicked off the afternoon with a great race in the semi. They needed to place top 3 to make the final. They established themselves solidly in 2nd place during the second thousand, which qualified them for Sunday’s final.   In the WL4+, the girls rocketed off the start and had nearly a one length lead at the 500m mark.   Through the middle thousand meters of the race, two boats began to chip away at Long Beach’s lead. Going into the last 500m, the girls had probably a ¼ length lead over Holy Names Academy.   That’s when our girls turned up the heat. Their rating surged and the girls were able to extend their lead to ¾ Length at the line. They had the fastest time of the day; 7:32, 2.5 seconds ahead of the next crew. 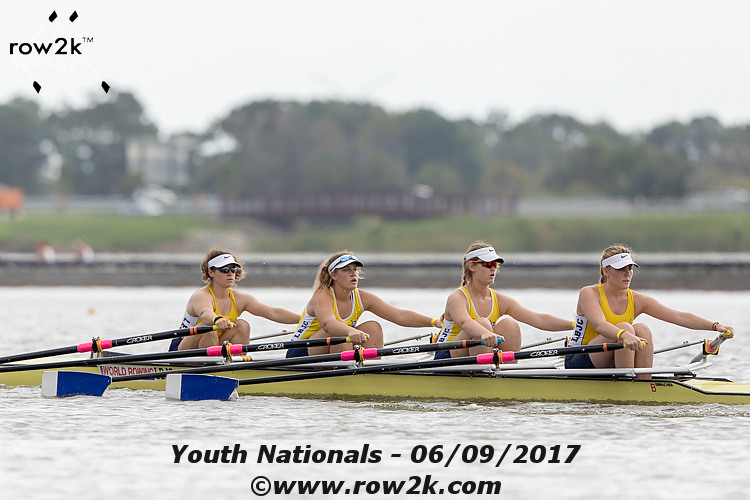 On Saturday morning, Long Beach was lucky enough to get their races in before the big thunderstorms and high winds rolled through and cancelled the rest of the racing for the day.   The LBJC Women’s 4x raced their semi final. The line up from stroke to bow was: Zoey Chakos, Annika Maxson, Helena Young, and Siobhan Quirke. There were 4 crews battling for 3rd the whole way down the course. Our girls were a length out of qualifying (top 3) with 750m to go. Unfortunately we were on the wrong end of that battle and finished in 6th place. It was a solid and aggressive race for our girls considering how close we were to CYC who had won our regional championships.

The next race was the “C Final” for our Women’s Lightweight 2x.   The girls looked great rowing wire to wire at 36 strokes per minute ahead of most of the field.   Unfortunately, the Redwood Scullers boat slipped away into first place and we ended up with a solid 2nd place in the C final, which is 14th place in the country. I know everyone on our team that made the trip to nationals trained with the highest expectations of performance.   We believed a medal could be within our grasp, but this was simply not our regatta. So while there may be a feeling of disappointment after this race, 14th in the country is an incredible accomplishment and we are very proud.   Holding ourselves to the highest standard, giving our best performance, and holding our heads high regardless of the outcome are what LBJC is all about.

The next day the team was at the course early to weigh in for the A finals of the lightweight men’s and lightweight women’s 4+. This was an entire year of training all coming down to one 7-minute race.   Both boats looked ready to go, confident and nervous all at the same time. 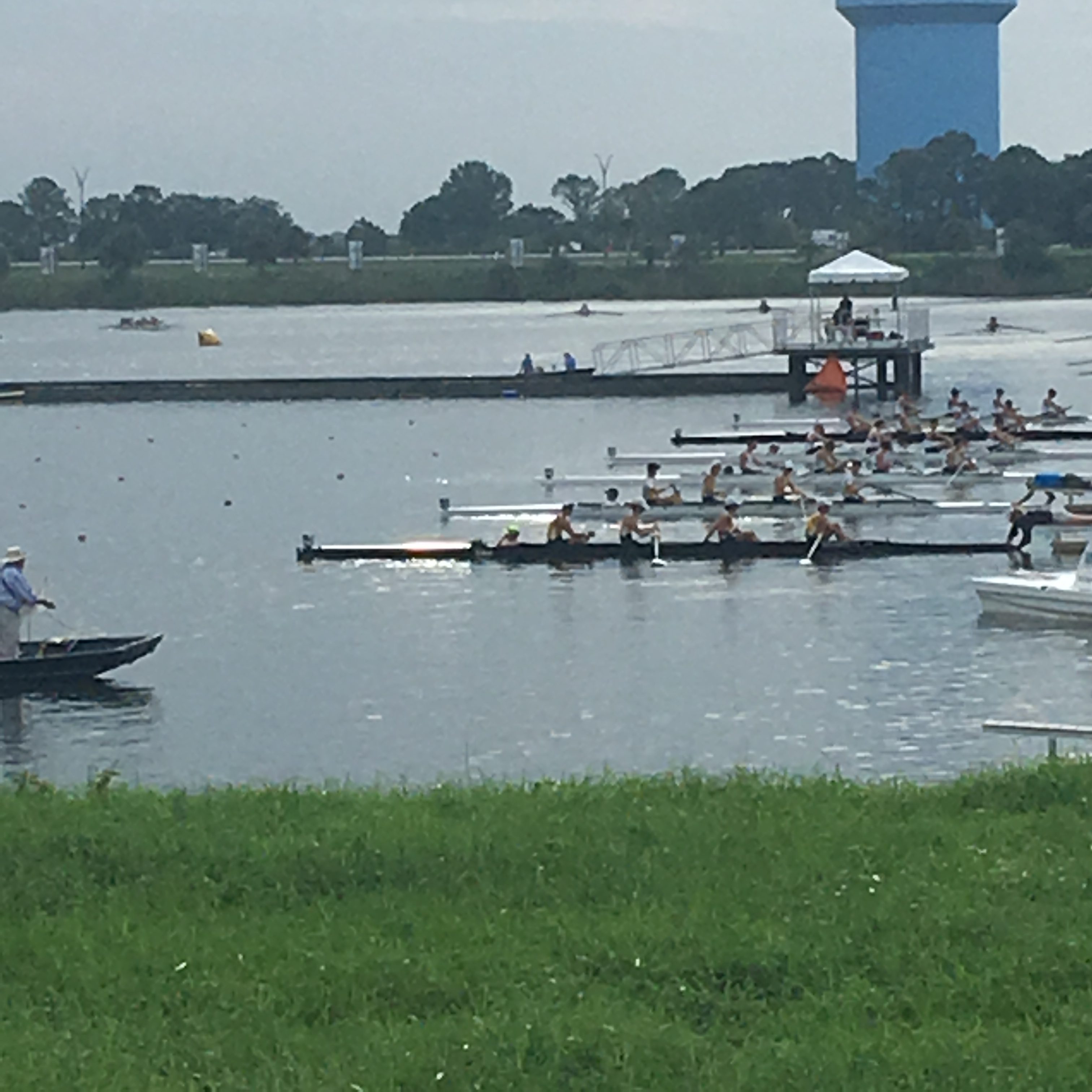 The most nerve-wracking part of the sport is the final half hour leading up to the race. As a rower, you have rehearsed it hundreds of times. There is nothing left to do other than go through the motions of the race warm-up with your mind firmly set on giving everything you have when the flag drops. (or in this case when the light turns from Red to Green).     Our Men’s Lightweight 4+ was up first. The line up from stroke to bow was Tibor Francia, Trent Francia, Jack Love, Logan Stockwell and coxswain Dillon Wilson.   Unlike other junior races, this race course uses a ‘light system’ for the start instead of the Referee using a flag to start the race.   The Sarasota course will host the 2017 World Rowing Championships so everything on the course is up to Olympic specification including the starting platform and the seven-story finish line tower.   Whether it was a malfunction of the light system or just a pure mistake, our guys took off at the start before everyone else did. The referee called the race back and issued our 4+ a False Start. One more of those and we would be disqualified from the Final.   All the boats were lined up again. Another boat false started.   Everybody lined up for a third time.   The race finally takes off. Our ML4+ rowed very aggressively off the line and were right in the middle of the pack.  At the 1000M mark, the boys were in 4th place and threatening for a bronze medal. Places 2 – 5 in the race were all very close.   In the final quarter of the race our young crew gave everything they had and ended up in 5th place.   I am sure those men wanted a medal, but 5th place is one heck of an accomplishment. Well rowed!

Next up was our Women’s Lightweight 4+ consisting of Jessie Rapoza, Josie Flohr, Rachel Taeubel, Jacqueline Taeubel, and coxswain Mary Ryan.   The girls were just beginning to enter the course to get locked onto the starting platform when everything changed in an instant.   Jacqueline was passing back the water bottles to Mary when she noticed that Mary was not responsive and having a serious medical issue.   They immediately pulled bow first into the starting platform and yelled for someone to call 9-1-1. This caught almost everyone off guard for a moment and then the regatta referees sprung into action.   One of the USRowing referees who was on the starting platform knew exactly what do and began to take care of Mary. We truly cannot thank Ruth Macnamara enough for what she did to help. She was incredible and knew exactly what to do.

Over the next 30 minutes the unbelievable character and resiliency of the Long Beach Junior Crew family shined through.   The girls in the LW4+ were ultimately the heroines of this story, but it would not have been possible without our entire team of parents, and athletes and coaches on both the men’s and women’s team.   Parents at the starting platform ensured that Mary got to the ambulance and that one of them accompanied her to the ER. This allowed the coaches to figure out how to get our girls 4+ to row down the course despite being in really rough emotional shape. The Men’s lightweight 4+ has just finished their race and were waiting at the finish line to watch the Women’s lightweight 4+ final. Once the women’s coaches got a hold of the men’s coaches with some help from the parents, the boys 4+ was sent back down to the start to have their coxswain, Dillon, fill in for Mary.   These boys had just rowed one of the hardest 2000m pieces of their lives and then turned right around without asking a question and rowed full blast back down the course.   Once they were there, Dillon hopped in the coxswain seat and the girls told him their race plan.   Let’s just take a moment to appreciate that TEAMWORK… Wow. Go LBJC.

Now back to the girls. Your best friend has just been taken away in an ambulance and you are not sure if she is ok. You have been crying for about 30 minutes. Your national championship final race is in 3 minutes. 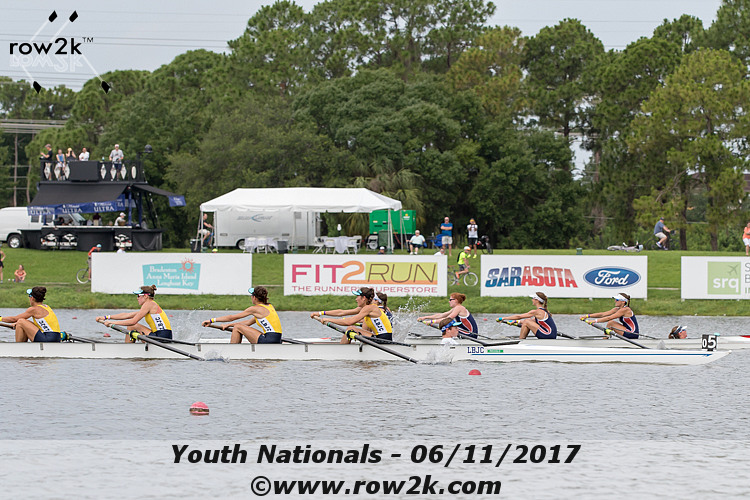 LW4+ sprinting through in the final strokes. photo crew: Row2k.com

I am pretty sure most people would either not race or simply paddle the course in honor of their fallen coxswain.   Not these ladies.   Within 3 minutes of Dillon hopping in the boat, they were locked onto the starting platform and the crews were being polled.   Everyone still had tears in their eyes. They had decided that they weren’t just going down the course, but they were going to give it everything they had for Mary. No one can be expected to perform at 100% given these circumstances, but they were very close to it. They blasted off the start looking understandably shaken and a bit rocky, but after 500m they were in first place.   Over the next 1000m, two crews had passed them and a third crew was about to pass them. Their dreams of a second national championship in the event were dashed and it was looking like they might not medal either.   Instead of slipping back into 4th place, the girls roared to life in the last 500. With 10 strokes to go, they were not only in 3rd place but now only a half length down to 2nd place. The last 100m they went up again, even faster, surging ahead to earn a silver medal. It was a memorable race, and truly inspiring.   That race took some real guts and showed a lot of heart and resilience. Amazing. 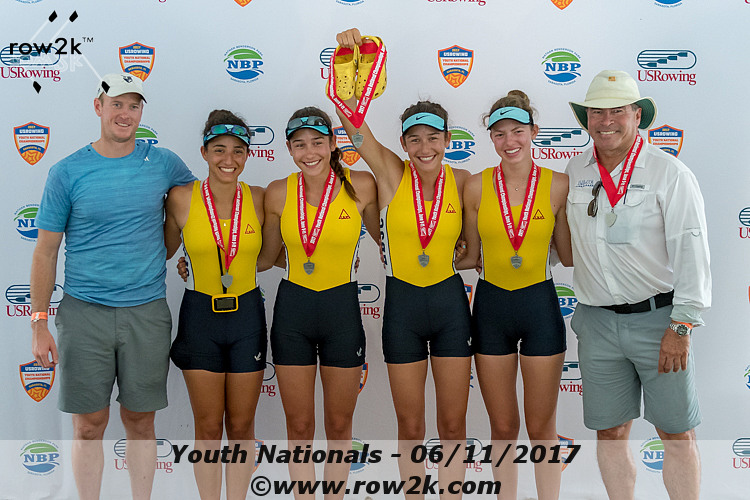 Amidst all of the drama unfolding, our Women’s 4x raced their B final shortly after.   The girls had an incredible start and fought hard all the way down the course. In the B final, we had CYC and Oakland Strokes who were medalists at Southwest Regionals just ahead of our girls.   This was almost a repeat race from early may.   While the W4x attacked all the way down the course and never let off the gas, the girls finished in 6th place. It never feels good to row behind other boats during your final race, but finishing 12th in the country is something to be proud of.   5 weeks ago the girls of the 4x were wondering if they were good enough to compete at nationals. I think they answered their own question.

After the trailer was all packed up. The whole team headed to the hospital to visit Mary, where she was recovering.   All in all it was a great trip to Sarasota, FL. Between the sing-alongs in the van, team dinners, escaping thunderstorms, and good hard fought racing, there was lots of team bonding going on. As a team we learned a lot on this trip, but most of all we were reminded how much we care about each other and how this team is willing to do whatever it takes for one another. 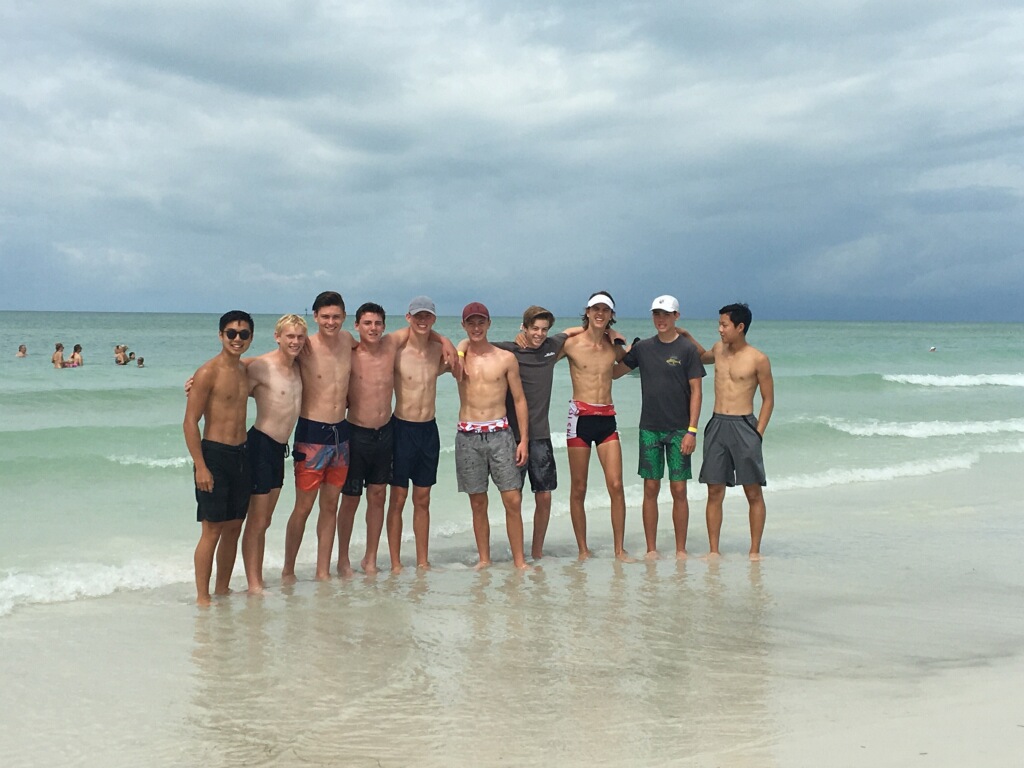